We at Macedonia Missionary Baptist Church are committed to making disciples. A disciple is an individual that is saved and dedicated to living a life modeled by Christ. We are committed to achieving and promoting spiritual maturity, inspiring others to grow into the likeness of Jesus, and impacting the world for the cause of Christ. This is Macedonia Missionary Baptist Church. We are The Ministry That Changes Lives.

In 2003, the members of Macedonia undertook the charge to organize a "Grand Centennial Celebration." Various committees were formed including a research committee. Under the guidance of Ms. Tracie D. Alexander, this group searched the archives and discovered an original deed showing the purchase of the land on West Henry Street in the year 1894. They discovered that while the church may have been chartered in 1904, the Macedonia Baptist Church was actually organized ten years prior. What a discovery! Although we have not uncovered any additional information, the history of Macedonia Baptist Church represents faith, hope, and a strong determination by its members to make progress.

The story you are about to read was told by Deacon James T. Templeton. Deacon Templeton vividly recalls the "old days and was gracious enough to offer a very factual recollection of Macedonia down through the years. This invaluable data was organized and documented by Deacon Lewis C. Davis and sanctioned by the Historical Committee. What follows is the history of Macedonia Missionary Baptist Church, past and present.

The Macedonia Baptist Church was organized 90 years ago after severing relations with Mt. Moriah Baptist Church. This occurred on June 20, 1904. Macedonia then was located on the corner of South Liberty and East Valley Streets. The first pastor was Reverend W.M. Evans. Reverend Evans served from 1904 to 1905. According to the church records, the chartered officers were Deacons C.H. Ray, John A. Alston, Arthur Jones and Dan Jackson. The only other recorded members were Mrs. Emma Rogers and Mrs. Fannie Foster.

Services were held at the South Liberty -East Valley Streets location until July 1904. In that same year, the small congregation moved to a temporary site. They worshipped upstairs over the Wright Scruggs Shoe Store. The shoe store was located in the Andrews Building, which was below the old Chapman Building. The Andrews Building was demolished in 1978.

Later, realizing that it had outgrown the church over the shoe store, the Macedonia Church family began the search for a new home. The search took place in the fall of 1904. A lot measuring fifty feet across the front was purchased and a slat building constructed. This building faced Exchange Street and the old C & WC Railroad. Macedonia remained at the Exchange Street location for 10 years, 1904 to 1914. 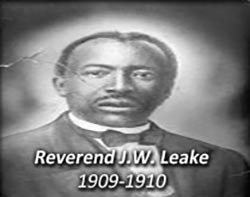 Macedonia was very fortunate in that its ministers were men of faith who rendered many years of Christian service. Following Reverend Evans, the first elected pastors were the Reverends Wint Wallace, Hemphill, Brown, J.W. Leake, Minor Fields, Brown (a second term), and John Wallace.

In 1914, the Reverend E.W. Bowen was elected pastor of Macedonia Baptist Church. Under the leadership of Reverend Bowen, the membership increased significantly. In response to this rapid growth, the church was rebuilt. It became a wood structure and rather than facing Exchange Street, it now faced West Henry Street. Reverend Bowen served faithfully until 1920.

Reverend R.S. Sims was elected tenth pastor of the church in 1920. The following year, 1921, Reverend Sims led the congregation in making an even greater improvement in the church's structure. Using untrained, but highly - skilled workers like Mr. Claude Hutchinson, a trustee of the church and brick mason, a new building was designed and constructed. The old wood building was used as a basic structure and the new building was constructed around it. The cost of the new structure was never recorded; consequently, its value can never be determined. However, it is known that men who were determined to erect a greater tribute to God gave much of the labor without charge. This work was also an expression of the unity and brotherhood among the members of the Macedonia Baptist Church. Reverend Sims served Macedonia until 1929. 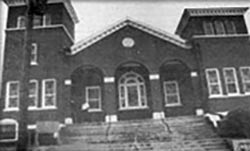 Historically, the Macedonia Church family has been a people held together by faith, hope and a firm belief in the power of God. It is with these principles and values that the church continued to grow and make progress.

When Reverend A.M. Means became pastor in 1929, the church turned its attention toward making internal improvements. One such improvement was the new furnace. It was installed using radiators for steam heat and replaced the old pot-bellied stoves. These stoves were located on each side of the sanctuary. The new furnace was a greataccomplishment for the church because it was installed at one of the most critical times in the history of the United States - the Depression. From this point forward, Macedonia continued to grow in members and Christian love. By the winter of 1941, Reverend Means left Macedonia and resumed his calling in Orlando, Florida. Upon the departure of Reverend Means, the church began its search for another leader.

A number of ministers delivered sermons during the search. However, the time had arrived to select the man who would be head of the church. Months had passed and Macedonia had no permanent minister. Realizing that a selection was about to be made, Deacon James T. Templeton had one request. Being clerk of the church at the time and a member of the Pulpit Committee, he asked the Board and church not to make any decision until after they had heard his recommendation. Deacon Templeton's request was granted. His next step was a visit to Laurens, South Carolina where he met with a young couple by the name of Willie L. and Jessie Mae Wilson. Both had taught school for a number of years; however, Reverend Wilson had been called to the ministry in March of 1932. 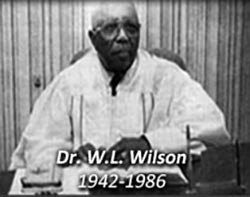 On the first Sunday, January 1942, Reverend Wilson preached his first sermon at Macedonia. The young man from Laurens was an overwhelming success. Several days later, on the Wednesday night before the second Sunday in January, the church met. During that meeting, Reverend W.L. Wilson was elected to the pastorate. He became the twelfth pastor of the Macedonia Baptist Church. On the second Sunday in February 1942, Reverend Wilson preached his first sermon as pastor of Macedonia.

Reverend Wilson led the church for 46 years. In keeping with the3 long-time tradition of the church, he, too, worked toward its progress. Macedonia's many accomplishments under the direction of Reverend Wilson included the payment of past church indebtedness, the installation of new pews and a baptistery in the 1940's and the purchase of a Hammond organ.

Under Reverend Jones's leadership, many additions were made. A new sound system was installed. Intercom, alarm and computer systems were purchased. The entire financial network was computerized. Other purchases included a van, piano, organ, fax machine, and a new marquee. To beautify the outside of the church, the grounds were landscaped Reverend Jones increased the Deacon Board to twenty-one. He included women on the Trustee Board, organized a New Members Committee, and revitalized the mid-week service. The youth became active participants on the 2nd Sunday morning Worship Services which enhanced their spirituality and talents.

In March of 1997, Reverend Kaiser W. Jones answered the call from Refuge Baptist Church, Columbus, Ohio and made the arduous decision to resign as Macedonia's Senior Pastor. Within the next, twelve emotional months, this congregation, without fear or trepidation, paid off the then existing mortgage. Once again, the tenacity and faithfulness of the people were tested; once again, the people passed the test. In October of 1998, the congregation elected the Reverend Oscar R. Cleveland as pastor. He was a spirit-filled pastor and minister of the Gospel of Jesus Christ. Reverend Cleveland shared his vision to improve and redirect the 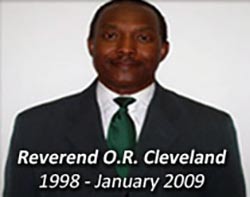 ministry at Macedonia. He instituted the renovation of the sanctuary, a new sound room, proposed plans to renovate the fellowship area, educational facilities, and build a family life center with a focus on senior care. Additional acreage was purchased for this purpose.

The first new Discovery Camp was administered for ages 4-12 during the summer of 2004. The Couples Ministry under the direction of Reverend Earl N. Alexander, II, started the Soup Kitchen in January 2005. Macedonia has an active after school ministry sponsored by the Child Evangelism Fellowship where A Good News Club is reaching more than 90 students at Park Hills Elementary. 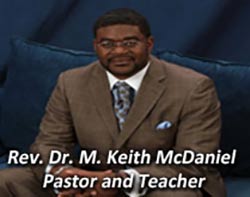 Preparing for the New Millennium by Teaching and Reaching the Whole Man was part of Reverend Cleveland's vision for the Macedonia Missionary Baptist Church. Reverend Cleveland constantly referred to Macedonia as "The Greatest Church in the Land." This is a reminder of what we can be, should be, and by the grace of God will be.

The Rev. Dr. M. Keith McDaniel was called to pastor the Macedonia Missionary Baptist Church in February 2010. He was installed officially on June 7, 2010.